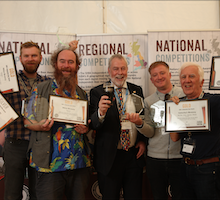 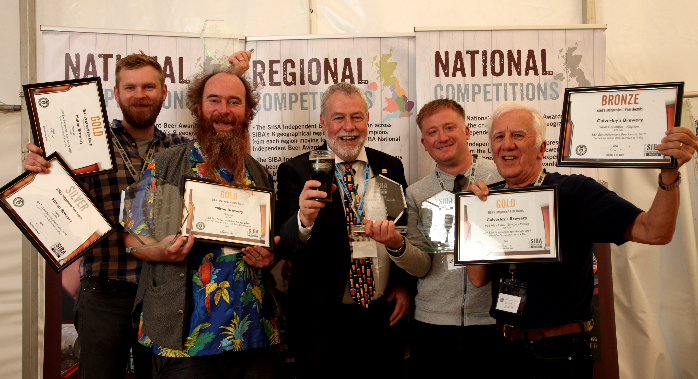 Two breweries just a few miles apart have taken home the two overall top spots at the SIBA East Independent Beer Awards, beating brewers from across the East of England, stretching from North Lincolnshire down to Essex and Hertfordshire, as well Norfolk, Suffolk, Cambridgeshire and Bedfordshire.

In the end though it was two breweries in Cambridge who took home thw two top spots, with Milton Brewery winning overall Gold in the cask competition and Calverley’s Brewery top in the bottled & can competition.

The prestigious awards, run by the Society of Independent Brewers (SIBA), and held at Elgood’s Brewery in Wisbech prior to their beer festival opening last night, are judged by brewers and beer experts and seen very much as the brewers’ choice awards in the industry.

Milton Brewery’s “Minerva” won the cask Gold and is Brewed with US, New Zealand and British hops for a powerful hop punch and satisfying bitterness. Collecting the awards was Founding Director Richard Naisby, who had this to say on the brewery’s success.

“It’s great to win as it’s an award from our industry peers and the brewers that matter. This beer won its category last year so to go one better and win the overall competition Gold this year is brilliant. It’s one of our favourite beers – golden, hoppy, and thirst quenching.”

Calverley’s Brewery’s “Pale Ale”, brewed with punchy American Citra, Simcoe and Mosaic hops, took home the overall Gold in the bottle and can competition, beating stiff competition from across the region. Collecting the award was Founder Sam Calverley.

“It’s great to get recognition in such a competitive market because it’s assurance for your customers that they’re getting really good quality even before they’ve tried the beer. We experimented a lot in the Taproom and this beer went down really well with customers so we knew we were on to a good thing. It’s light, refreshing, but with lots of citrussy US hops it’s a great beer to have with food.”

Commenting on the competition was SIBA Competitions Committee Chair Guy Sheppard, who presented the awards,

“I would like to congratulate all of the winners in this year’s SIBA East Independenty Beer Awards and in particular Milton and Calverley’s Brewery who managed to edge out competition from across the region and take both top awards back to Cambridge!”

The competition took place immediately before the opening of the Elgood’s Brewery Beer Festival 2019, taking place at Elgood’s Brewery in Wisbech, which continues today, Friday 20th 5-10.30pm and Saturday 21st 12 midday until 10.30pm. The festival features over 150 beers from Independent Craft Breweries and will give the chance to be the first to try the regions newly award-winning beers.