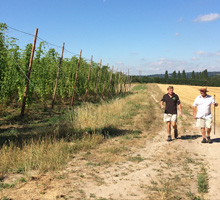 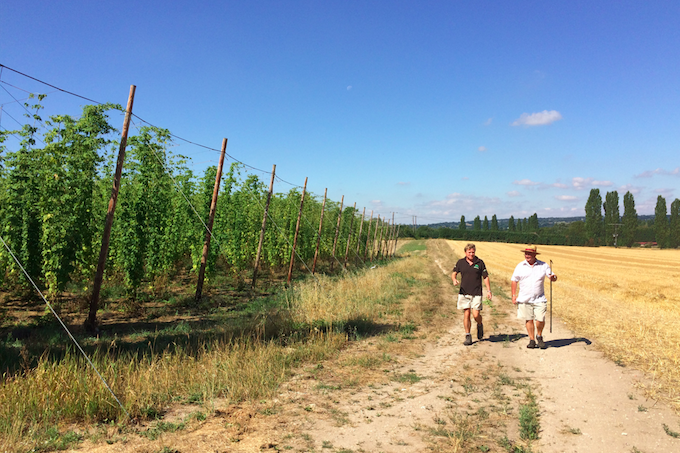 Hogs Back Brewery is predicting a top-quality hop harvest this year, with the impact of the long, hot summer raising expectations of quality over quantity. With plans in hand to relocate the hop garden to a much larger site for 2019, the fourth, and final, harvest on the existing hop garden will take place mid-September, after which the process of transferring hops, and planting new ones, will begin.

The brewer, based near Farnham in Surrey, has been closely monitoring hop growth during the heatwave.  Estate manager Matthew King said, “This is the first extended period of dry and hot weather we’ve experienced since planting the hop garden in 2014. Hops thrive on heat and sunshine, but the lack of rainfall has affected their development. They are drawing water up to the top of the plant which is looking very healthy, but we’re not seeing as much lateral growth lower down.

“For this reason, we’re expecting this year’s harvest to be more about quality than quantity. We’ve learned a lot this summer about how hops respond to hot and dry weather, which will stand us in good stead when we move to our new hop garden.”

The new hop garden is more than double the size of the existing one  – a total of eight acres, compared to the current 3.5 acres – and is located within Manor Farm, where the brewery itself is sited.   The garden will sit in a prime location on the best land on the farm and will also include a test area for different varieties.

Work is due to start this month on the new garden – formerly a wheat field – and is expected to be complete by early 2019. The site will be prepared for the arrival of hop poles which, thanks to an absence of overhead power cables, will be taller – and therefore higher-yielding – than those at the existing garden. After several miles of hop wire have been added, 2,500 hop plants from the current site will be moved by hand, and new ones planted.

Hogs Back Brewery managing director Rupert Thompson said, “This is a huge investment in the future of Hogs Back Brewery and we’re proud to be continuing the journey that started with the planting of our hop garden in 2014.

“The new hop garden embodies everything Hogs Back stands for as a ‘farmer brewer’ and will make us an even more sustainable, environmentally-conscious business: we can measure the distance from hop garden to brewery in ‘food feet’ rather than ‘food miles’!

“Expanding to the new garden will make us more self-sufficient in hops, ultimately providing around half our hop requirement, compared to less than 25% currently. Just as importantly, growing our own hops has made us better brewers, as with each harvest we’ve learned more about how the flavour of the hops is affected by the weather, and how that then impacts the quality and taste of the beer.

“Getting closer to this key ingredient has given us a level of control over our beers that few, if any, other British brewers can claim.”

Hogs Back will harvest four hop varieties in September: Farnham White Bine, a traditional local hop which Hogs Back revived from near-extinction; Fuggles, used in the brewer’s flagship TEA (Traditional English Ale); Cascade, used in Hogstar Craft English lager, and Pioneer, added alongside the other varieties to the seasonal Home Harvest Ale.