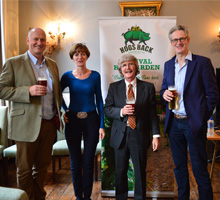 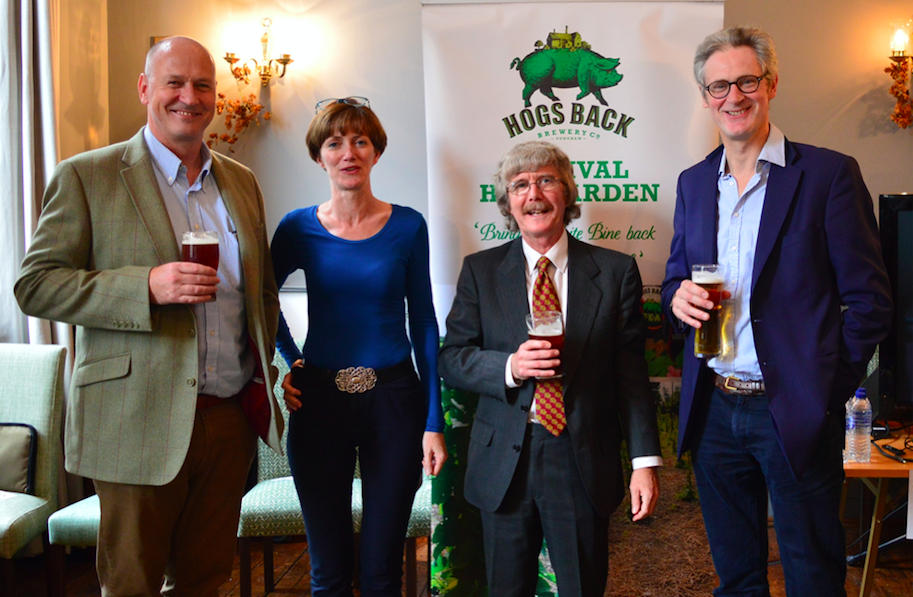 Hogs Back Brewery is reaping the rewards of planting its own hop garden next to the brewery in Farnham in Surrey as the price of imported varieties reaches an all-time high, fuelled by the weakness of sterling.

Speaking at a ‘Hop Tales and Hop Tails’ event in London to celebrate the brewery’s third hop harvest and share insights on the UK and global hop markets, Hogs Back Brewery managing director Rupert Thompson said, “We planted our hop garden next to the brewery in 2014, as part of our commitment to local sourcing, reducing food miles, sustainable brewing and taking greater control of the ingredients in our beers. Growing our own hops has been rewarding in many ways and is certainly making us better brewers.

“The hike in hop prices, firstly because of a shortage of US varieties, and then the post-Brexit referendum fall in sterling, have subsequently delivered another benefit, as growing our own hops gives a level of control over one of our key ingredients. As prices of imported hops have reached  an all-time high, so this benefit will continue, especially as we plan to grow the proportion of our own hops used in our beers.”

Hogs Back harvested four varieties in its hop garden in September this year: Fuggles, used in their flagship TEA; Farnham White Bine, a traditional local variety which Hogs Back has revived from near-extinction; English Cascade, used in Hogstar English Craft Lager; and a newer dwarf variety, Pioneer, which Hogs Back has used for the first time in its 2017 Home Harvest Ale. UK imports from the US of Cascade, a popular variety in craft brewing, have increased in price by about 60% over the last year.*

‘Hop Tales and Hop Tails’ was staged by Hogs Back Brewery in London, with talks by hop experts Peter Darby of the Wye Hops research centre, Ali Capper of the British Hop Association and Paul Corbett of Charles Faram. Topics explored included: hop breeding; flavour attributes of British hop varieties and the 2017 UK hop harvest, and trends in the global hop market.

At the event, held at CAMRA award-winning pub The Dispensary in Aldgate, guests also enjoyed a selection of Hogs Back beers including the first batch of Home Harvest Ale, an ale brewed with all four varieties grown on the hop garden.  Other beers, also brewed with Hogs Back hops, included TEA (Fuggles), Hogstar (Cascade), Surrey Nirvana (Cascade) and Farnham White.

Thompson said, “We’ve now been growing our own hops for three years and are the country’s leading brewer-grower, so we felt we were in a good position to hold this hop-focused event, which we’d like to see become an annual fixture.”

Matthew King, Hogs Back Brewery estate manager with responsibility for the hop garden, said, “With each harvest we’re discovering more about the part that ‘terroir’ plays in the flavour and aroma of hops. The microclimate where our hop garden is located, in the lee of the Hogs Back ridge, is warm and protected from the wind and seems to favour hops, which is why they’ve been grown here for centuries.

“Weather is only part of the story with hop farming; there’s also a lot of management that we can control. For example, this year we further refined the structure of strings and wires supporting the hop plants, as well as ensuring we gave them the right soil and nutrients, and controlling pests and disease. Hops are a fragile crop, but bringing in our third harvest and then tasting beers brewed with those hops, makes the hours of labour in the garden all worthwhile.”

Hogs Back brewery is working towards growing 25% of the hops it uses in its own garden, and sourcing 70% within walking distance of Tongham. This year saw hops dried in a brand new oast house, built just three miles from the brewery and the first in Surrey for over 50 years.