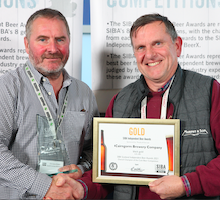 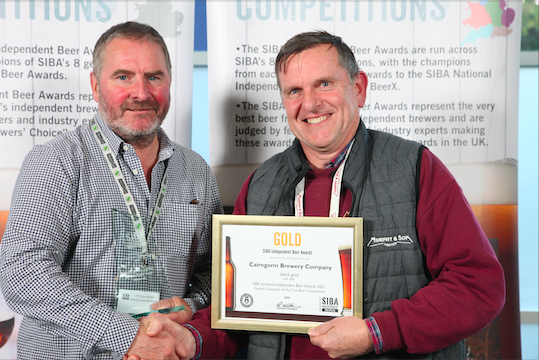 Cairngorm Brewery have taken home the Overall Champion Cask Beer Award at the Society of Independent Brewers (SIBA) Scotland Independent Beer Awards 2021, which was this year hosted at the Bolton Beer Festival in a joint judging event with the SIBA North West Region.

Cairngorm’s aptly named ‘Black Gold’ took the Overall top spot – described as a ‘traditional Scottish Stout with just the right amount of sweetness’ it will now go on to fight it out against rivals from the rest of the UK in next year’s National Finals. The Overall Silver award winner was first-time entrants Argour Ales’ ‘Gobhar Reamhar’, with the Bronze going to Five Kingdoms Brewery’s ‘Wee McAsh Bitter’.

The SIBA Independent Beer Awards are run by and for brewers and are judged by fellow brewers from elsewhere in the UK, as well other representatives from the industry and expert beer judges – making these the much coveted ‘brewers’ choice’ awards in Scotland.

The Society of Independent Brewers (SIBA) represents independent craft brewers across the UK, and all the winners of the Scotland Independent Beer Awards will now go on to the National Finals at the BeerX UK event in Liverpool, March 2022. Hosting the awards on behalf of SIBA was Neil Walker, Chair of SIBA’s Competitions Committee.

“It was great to see so many excellent Scottish beers represented in these hard-fought awards, and a huge congratulations goes to all of the winners, but in particular this year’s overall Gold Cairngorm. A wonderful beer and a very deserving Champion!”

Bolton Beer Festival at the University of Bolton Stadium continues today and over the weekend, where all of the award-winning beers below will be on sale.